If Elvis had Facebook you could friend him. The rest of his friends would receive a notification that you are now Elvis’s friend. You could scroll through his timeline which not all believe ended August 16th 1977. There is some evidence that Facebook has made it such that not everyone’s life ends when the death certificate is issued.

A disturbing trend has emerged where the rest of dead speak to us through Facebook, reminding us of their birthdays. Other social media, LinkedIn for example has advised me my dead client has a new acquaintance. Perhaps they are linked on the other side of the Great Divide. Perhaps on the other side Elvis still curls his lip in a sort of smile when he hears applause, and then says “Thank ya, Thank ya very mush”.

I will inquire of Mr. Zuckerberg what this all means.

According to our coroner, my client died last year. Yet he still keeps popping up on your service popularly known as “Facebook” referencing new connections and a birthday. Is there something metaphysical about this phenomena? Are you now conducting séance or is there some new dimension to life?

Please advise at your earliest opportunity. Thank ya, thank ya very mush. 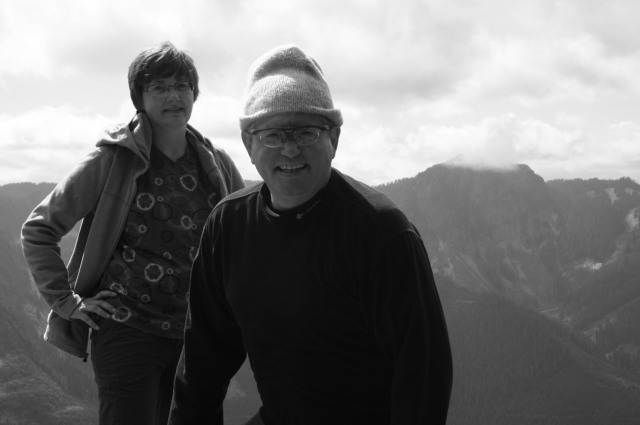 My sister is a lawyer too. We hike along and discuss the particulars of her appealate practice and the sorts of issues I regularly see with will and trusts. Nothing like getting away from it all.

In my business this is considered forum shopping, but if you have any real money at all, defined as more than $2 million dollars, please do not die in Washington State. An aggressive tax scheme begins at that point.

Some other bad places for your family but good for the tax collector are Oregon, Minnesota according to the anecdotal evidence which has washed up on the shores of Puget Sound and found its way to my office.

On the other hand if you are worried not about taxes but instead just want to die easy and see your family have your worldly goods sooner than later, avoid California and Florida.

This assumes you can plan your own death. How bourgeois.

“Now she’s done it! This will screw everything up!”

I heard this while having lunch at the Totem Diner in my hometown Everett Washington this week. I have heard this before in my office.

Or I hear “She went to a lawyer”… stated with lament, as if the process of transferring property at death was as simple as filling your Chevrolet with gasoline at the Shell station.  Instead it is much more like replacing a timing chain.

The gas station metaphor works well here. The people into see me might as well say She really didn’t need a mechanic. It’s was really simple to work on cars until they started putting computers in them.  Everybody knew what to do. It’s was easy. Thats the way it should be.

Stated another way: Everybody already knows the house was supposed to go to me.

I look around at the people at the diner and I see what we call “plain folks”. They work when they can, and save what they can. They drive Fords or Chevy’s, go to church on Sunday and like football. And life is pretty simple, until some lawyer, or auto company, makes it complex. The people at the diner do not want life to be hard and they don’t want death to be hard either.

Likewise we have come a long way from the simple will. Consider that in the 200+ years the country has been in operation layers and layers of law have been enacted or cases decided by courts. Now how is the guy at the Totem going to figure that all out?

I would prefer to live in a simpler America. I liked working on my old mustang. But those days are gone for good. Like I rely on my mechanic, people are better off coming to see a lawyer for family property transfers. You know you will do it right, and leave it the way you want it instead of what “everybody already knows.”

By the time you are asking this question it is probably too late.

There is a county in Florida where the locksmiths have an 18 month backlog of drill orders from Superior Court on safety deposit boxes in order to gain access to the will people died leaving there. Not only has no one been able to find the will, probably in the box, they can’t find the key to get in any case.

In my county here in Washington State I saw a lawyer ordered to stand watch and inventory the contents of the safety deposit box under these circumstances. What should have been a brief inexpensive court appearance to start the probate became a several thousand dollar event.

You know, I have seen a lot of things in my career but I have never known there to be a black market in unprobated wills. It is not likely there will be a theft of this document, so perhaps leaving somewhere people might find it is best. Some say wrap it in plastic to keep it from being ruined and leave it in the freezer. Me, I spent thirty bucks at the hardware store and bought a fireproof box. The key is right there to access, but if it should melt in the fire that kills me I have left the other key with a relative.

Leave the jewels in the safety deposit box. Once the original will is admitted to probate the court will issue your personal representative the authority he or she needs to get into the box, without a locksmith this time.

Lets say your parents die. Lets say they trusted you to “do the right thing” so they have made you the personal representative of the estate when they are both gone in order to distribute the estate “Subject to Probate”. Lets review what that means.

“Subject to Probate” does not mean a witch hunt. It is not a cry to “unleash the lawyers”. Your parents estate is not an opportunity to get back at your siblings. This is not your money, it belongs to the people or charities listed in the will, “subject to probate”.

During the probate the personal representative is not allowed to profit. If you are the personal representative you have what is called a fiduciary duty to the people named in the will. The metaphor is that the probate is not an arms length transaction, and certainly not a means to “get a good deal” particularly if it is at the expense of the others named in the will.

The appropriate metaphor instead is more closely related to family life, instead of held at arms length, you hold them close. If you find you cannot do this, resign. All will be better for that act of discretion.